BMW will slowly but surely unveil a new SUV that will be the best it has ever created. It will be the BMW X7 with a three-liter six-cylinder and a 4.4-liter 8-cylinder.

At the end of this year, BMW will present its biggest SUV for the time being. It will be the X7 model, based on the concept of the same name last year, which is now revealed in official spy photos. The body of the car is covered, but some details are already visible and we have a lot of information about this car.

First of all, there is an interesting offer of engines, which will be based on the seventh series with the car shared by the CLAR platform. Like the 7-Series and the X7, it is set to a three-liter six-cylinder and the top-of-the-line variant will feature a 4.4-liter 8-cylinder M5. It will be available next year. The twelfth member has not been confirmed for the time being. 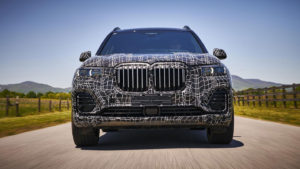 Sparkling and ecological souls will also come to their minds, as the Plig-in version will also be available, but this was primarily due to the reduction of fleet emissions. It will combine a two-liter four-cylinder with an electric motor directly in the gearbox. The engine will otherwise be supplied with an eight-stage automatic transmission as well as a standard 4-wheel drive.

As has been said, the design of the car comes from the X7 iPerformance concept last year, with which the car will share a mask with giant front kidneys, which are also visible in front of the note layer of the camouflage film. The main headlamps will be quite narrow and the luggage compartment cover is also interesting. It is divided into two parts, while the bottom will also act as a bench. 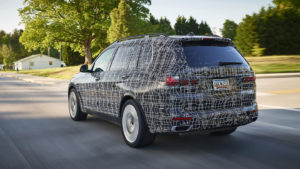 There are seven seats in the interior, with the third row accessible only from the electrically sliding second row. There will also be a highly luxurious six-seater version. The driver will be a 12.3-inch grand dashboard and the same dashboard touch screen with the latest multimedia system. The same big screen will be in front of the driver as a digital instrument shield.